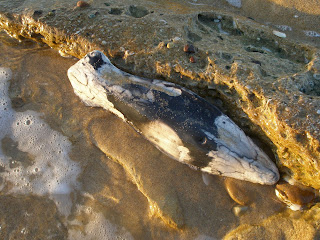 There were 24 of these clay bodies, coated in bees wax.  Nice to hold.  The kind of shape that felt like it had been purposeful in another life.  6 of them went to Perth.  6 went to Melbourne.  12 were abandoned on the beaches and water ways around Lakes Entrance and Lake Tyers.  All of them eventually disappeared, and I learned the very great pleasure of letting go of something I had made. 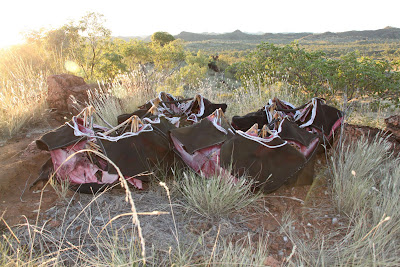 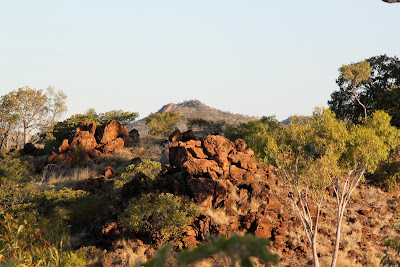 This is my fifth visit to this site between Cloncurry and Mount Isa, Queensland.  The first was to leave the 'Baggage' at its rocky outpost, then returning annually to record the progress, or more accurately, regress of the baggage.  It has become a ritual pilgrimage.

There is no evidence of any other human visitor to the place, even though many people come to a nearby campsite, made very attractive by the proximity of an old mining weir that still holds water enough to make fishing a possibility.

My first visit in 2007 was by chance, seeking a site for the baggage.  I camped there for five days, making four trips on foot, up through the rocky hills to deposit the baggage.  In this time I saw no other people, so I was pretty surprised to find a few others visiting the weir and sometimes camping when I returned the following year.  I reckon this marks the time of the site appearing in a 'free camp' guide book, because since then the numbers have grown each year.

I was resentful of these 'other' campers, especially when a caravaner started up a generator so he could watch television.  I, in my swag, with my campfire, congratulating myself on my lifestyle and feeling superior because of my purpose in returning to this place, was indignant at the intrusion.  It quite spoiled my visit, and I wallowed in bad attitude.

This year I felt some reluctance to even go there, but was even more reluctant to break my annual routine.  Knowing there would be other campers and they might not meet my expectations of what camping is all about, I resolved to be more accepting of the reality of the place.

Glad I did that.  2011 proved to be a very good year.  Indeed, there were more campers than ever, but I spent a lot of time on the hill, reflecting on the unfolding story of abandoned art, life, and all that  stuff.  I came to the conclusion that everything we do is about feeling.  There need be no more reason than that.